What REALLY Drives Your Actions and How You Feel? Deep Dive Into Values and Rules with Brad Bizjack 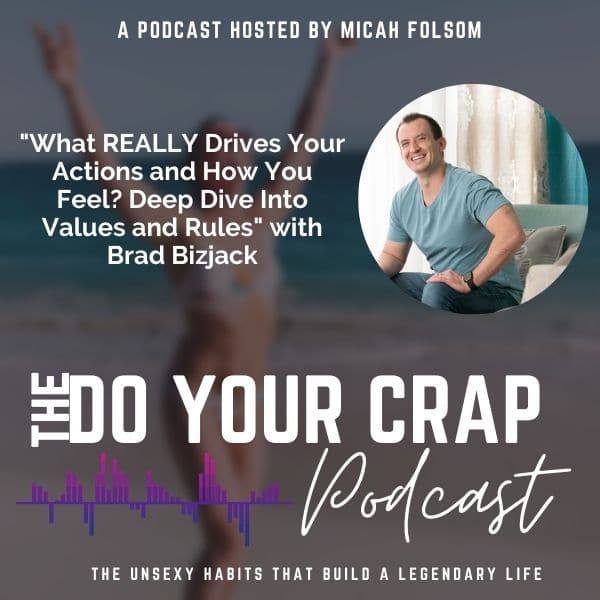 In this episode, I am joined by fan-favorite Brad Bizjack to talk all about how to acknowledge your values and beliefs, interpret them in how you think and act, and how to re-prioritize them to set yourself up for long-term success and fulfillment. Brad is the mindset coach that has been working with my team and it has been literally life changing! He has been a fan favorite on my show, so I asked him to join us again to specifically talk about what really drives your actions and how you feel.

2:30 AN INTRODUCTION TO BRAD & HIS STORY

Brad started out his journey always feeling like he was never enough, always craving validation. He started off his journey with $92,000 of student debt!

He went into online business and for some reason it just wasn’t working. He was trying everything and doing what felt like the right things, but kept focusing on the people around him who were succeeding at great lengths.

Although money was tight, he knew that he needed to hire a mindset coach. After his first call, she told him something he’ll never forget. She said, “Brad, you’re so attached to success that you are missing the whole point. You need to find a way to love where you are at because business success and money isn’t going to make you happy. It’s happiness and appreciation of life that’s going to lead you to success.”

5:17 BRAD GOT FIRED WITH A NEGATIVE BANK BALANCE

Brad got a ticket to a Mindset Conference and the months leading up to that, he got fired from his job. Luckily, he already purchased the ticket, but now found himself $92,000 in debt with no income. He bought peanut butter and bread in San Diego because he couldn’t afford to eat out. His bank account was overdrafted while he was across the country.

That day the conference topic was “Appreciation is the Master Skill to Faster Success”, and from there his mindset changed forever. He was able to create a 7 figure business, he could buy that ring for his wife, they moved to the same city, and now they have a seven month old where he never has to miss a moment with her. He learned that life is always happening for you, not to you.

Do you have a macbook? If so, you know that every once in a while, you have a notification that pops up in the right corner of your Macbook saying “Hey! Updates available!” You then hit “restart later”.

Eventually, the computer starts to slow down. This is how most people live. They have dinosaur software basing their beliefs off that and what they saw modeled in front of them. They never said “maybe it’s time for a software update”.

There are two driving forces that control your entire life: Beliefs and Values.

Values are the emotional states that you either want to move towards or away from. Love and honesty would be a “towards value”. Overwhelm and anxiety would be examples of “away from values”.

What do you value? Write down all of these values! Now, write down which values you prioritize. For example, do you prioritize love over success, or the other way around? How you answer questions like this will give you a very different perspective on life.

If you’ve ever had a moment in your life where you were aiming towards a dream – but find yourself taking 1 step forward and 3 steps back, it’s because of a values conflict. There’s an inner conflict that people face!

If somebody values love really highly, but also values avoiding loneliness, will they ever leave a relationship, even if it’s not the right thing for them?

27:40 HOW TO REVAMP YOUR MINDSET ON VALUES

Here are the two core things to know when you’re trying to adjust the way you prioritize your values:

#1: Understand the consequences if you don’t change. Think of your life in five years from now if you keep the same value structure.

#2: Tell yourself the truth. If you take a look at success and want it really badly, but also avoid rejection, chances are that avoiding this is creating a huge roadblock in your life. You’re telling lies to yourself about rejection. Lies such as calling yourself a failure. However, if you tell yourself rejection is your only way to succeed, you will look at it in a totally new way.

Brad believes that rules are even more exciting than values! For most people, it’s easy to feel overwhelmed, but it’s hard to feel appreciation, passion, and success. Most people make it hard to hit their “toward” values and easy to hit their “away” values. Every single person has an emotional home that they go back to. Some people naturally go back to love, some anxiety. Ask yourself which emotion you go back to most often.

The reason you have mom guilt is because you have written this set of rules you live by that are not serving YOU. If you rewrite the rules, the mom guilt will start to go away.

When Brad sees anyone with mom guilt, he calls it the “crazy eight”. On one side of the loop is perfection, and on the other side is guilt. The human nervous system can only take so much self punishment. So what do you do? You interrupt it with limiting behavior.

The way to interrupt the “crazy eight” is to tell yourself the truth. Truth is that you are human, and that you are already enough. If you want to be perfect, it is because you want more validation. The greatest way to love yourself is to celebrate yourself.

Join Brad’s next master class: “How to Succeed Without Working More Hours” this Wednesday, May 5th at 10am CST. You can register for his webinar here.

And if you aren’t already subscribed to my weekly emails, get on the list for a podcast email and weekly newsletter here.

← Navigating Social Media as an Introvert with Matt Johnson Reframing Anxiety: Having It Vs. Doing It →