Navigating Social Media as an Introvert with Matt Johnson 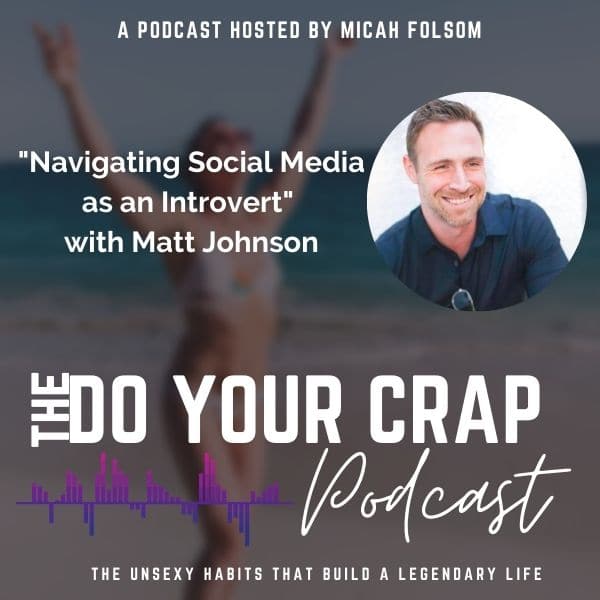 I’m super stoked for today’s special guest, Matt Johnson! Matt is an introvert like me, yet he is an author, marketing agency founder, podcaster, and so many things! He helps introverts find success by being themselves. He’s got his hand in a lot of cool things and I’m so excited to dig deep with him!

In this episode, Matt will share how to create influence and impact, navigating social media as an introvert without having to be a social butterfly. He shares the simple steps you can take to become micro famous, choosing your platform wisely, and the important distinction between attention & influence.

2:20 AN INTRODUCTION TO MATT & HIS STORY

Matt was a homeschooled Pastor’s kid – so he always thought he’d end up doing that or being involved in music. In his mid 20s, he started a real estate team but due to the market crisis of 2007, that was shut down.

After spending time trying to figure out what his next step should be, he joined a marketing agency and it changed his life. One of his co-workers pitched the idea of starting a podcast together and it just took off. This podcast is called Real Estate Uncensored. It took him from being “just a guy” who worked at an agency, to becoming a micro influencer in that industry in just 18 months.

Fast forward to today, he runs an agency launching podcasts for influencers. He has one product and a systematic, profitable business that he enjoys.

5:00 WHAT DOES IT MEAN TO BE MICROFAMOUS?

The definition of microfamous is to become influential to the RIGHT people. The advice of GaryVee works for people like him that are major extroverts, but it doesn’t work for everyone. Being microfamous is when you speak, people take your advice and listen because you’re an authority in that space.

It’s all about niching down! There’s always something about you and your personality where people feel a sense of comradery with you. This works even if the product you’re promoting is the same as many others.

There are a couple of realities you need to know about social media. There is no denying that the algorithm works in favor of the extreme social butterflies who are highly engaged and creating content for 2-3 hours a day (with more and more engagement in between). That’s not possible or enjoyable for a lot of people though. For Matt, he’s all about podcasting because he enjoys long drawn-out conversation. You don’t have to do all the things that extroverts tell you to do to be successful.

Right now, stories and engagement are in your face! However, evergreen content such as podcasts and YouTube have a longer shelf life. Matt still gets hundreds of views from content published in 2015!

25:00 THE DIFFERENCE BETWEEN ATTENTION & INFLUENCE

The difference between attention & influence is something that many new entrepreneurs face. If you’re only posting things for likes and engagement – you aren’t focused on the content that truly offers value to your audience. Identifying your message and being confident in the value you’re adding in your social space is a breath of fresh air because it removes the validation from ‘likes’ so many entrepreneurs put themselves up against.

If you’re not willing to repel people by being your authentic self, you’re not allowing yourself to magnetically attract the right people! As many freelancers are, Matt found himself in multiple businesses with multiple different projects and objectives. He went through the pain of having the longest to-do list in the room and walking out of every meeting with the most work. This gets freelancers to the high 5 or 6-figure range, but stops there. People get into this situation a lot and Matt had to gain the confidence to stand on his own and take control over his career.

That’s when Matt made the transition into arranging his schedule the way that HE wants it to be, and allowing himself to do his best work in the times that fit his schedule. Learning to say no to the wrong things so that he had the time and freedom to say yes to the things that align with his passions.

You can get a FREE copy of Matt’s book at getmicrofamous.com.

← Simple Things to Prevent Overwhelm and Burnout What REALLY Drives Your Actions and How You Feel? Deep Dive Into Values and Rules with Brad Bizjack →