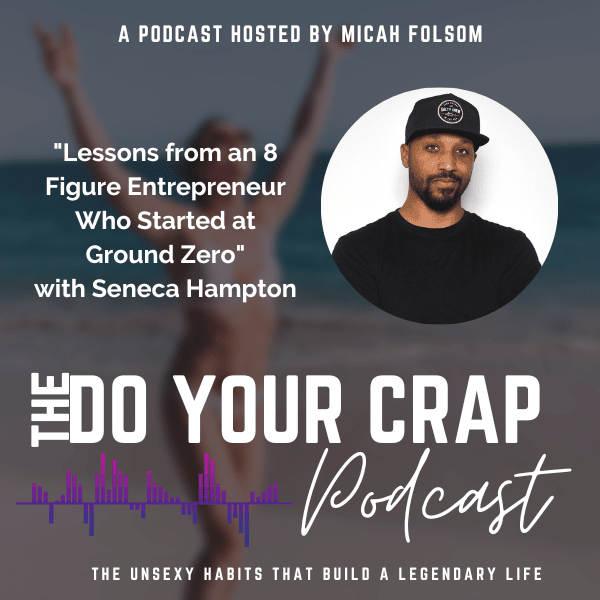 In this episode, I’m chatting with Seneca Hampton who is an entrepreneur with multiple 7 to 8 figure businesses. His entrepreneurial career has been a test of his persistence, trying 27 businesses before one actually stuck. Literally starting at ground zero, he shares his story and his wisdom, reminding us that it’s not only the business skill that creates success, but also the mindset behind it.

Seneca shares his background and how he grew up in a big family without a lot of money. He was labeled as the lazy one, but he was really always looking for the most efficient way to do things. Seneca saw how other people in his family had elevated their lifestyle and he set out on a quest to figure out how to do that for himself. He started trying out different business ideas to create success.

11:39 Multiple Failures Before The One

After trying 27 different businesses and failing, as one could imagine, Seneca felt so defeated. He reflects on how he didn’t have the right mindset behind what he was pursuing. None of his work was goal or purpose driven. Seneca was fed up with his situation when he came across the book “Rich Dad, Poor Dad” that changed his life.

The biggest shift for Seneca was when he realized that nobody was coming to save him. He had to go out and make it for himself. He realized that his problem was that he wasn’t accepting responsibility for his life. It’s so much easier to blame someone else. Seneca shares how he uses his influence to get his ideal outcomes and how he’s grown to love problem solving.

A big part of entrepreneurship is being willing to grow yourself. Mindset is everything and problem solving becomes a way of seeing the world. Seneca talks about mindset mistakes he made in his previous business attempts. He was trying to be like everyone else and wasn’t playing to his strengths.

Seneca shares the story behind how he created his athletic tape brand. He was learning about selling at the time and was putting a lot into someone else’s business. Based on a technicality of a deal, his boss took a huge amount of money away from him which prompted him to quit. He felt like giving up at this time, but he continued to try other businesses and other jobs. He was doing customer service for Apple when he came across a brand that was selling light bulbs.

39:25 Everything Started Coming Together

Another huge shift for Seneca was applying the mindset of school to his job. He was studying and learning to be the best he could be. He then came across a video about the opportunity to sell products online. He knew it was the opportunity he was looking for and he became obsessed. Seneca helped the lightbulb company experience massive growth and he began looking for a product to create. A story from his past gave him the idea of athletic tape. He set out on a mission against the big brands.

45:05 Remolding the Way He Thought About Things

All along his journey, he was consuming podcasts, seminars and books. Though Seneca was getting caught up in the negativity of “what ifs” until he realized he could always make more money. He was investing heavily in himself and breaking down his fear of failure. Over time, he has built his confidence in entrepreneurship and he embraces the journey.

Seneca tells a story about how he applied to be Tony Robbins’ assistant at one point. One of the biggest lessons he learned from him was how we often get stuck in our own heads. There are so many lessons that Seneca has learned along the way that are now so valuable to him.

I ask Seneca about what he’s most grateful for now that he’s a Dad. He thinks he’s often too hard on himself, but reflecting on what he can do better is also a gift to his kids. He instills the valuable lessons that he’s learned in his kids.

Resources from this Episode & Working w/ Me

Get Access to My Free Masterclass for Network Marketers – The 7 Essentials to 7 Figures Blueprint: micahfolsomfit.com/7essentials

Work w/ Me on your Health Goals in my Virtual Gym: micahfolsomfit.com/getfit