Self Discipline is Your Superpower with Business Coach & Former Pro Athlete, Dre Baldwin 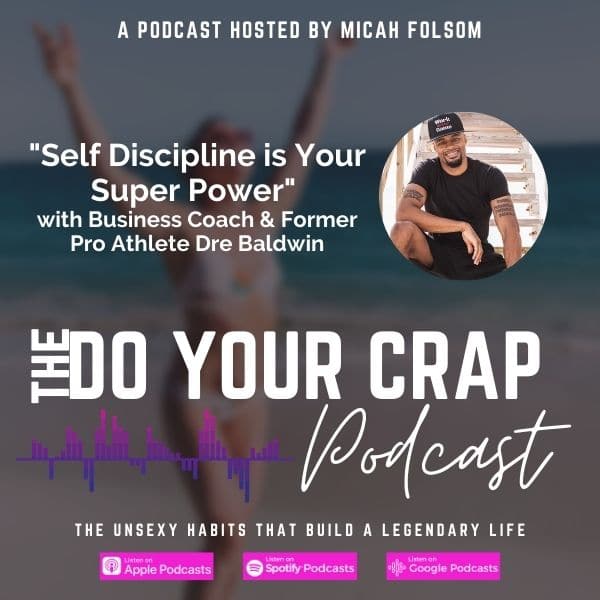 In this episode, I bring on Entrepreneur and former pro athlete Dre Baldwin. From believing in yourself when things aren’t looking the best, to building a business through Youtube, Dre goes into it all! And for those of you that are athletes, you are going to love this episode! Dre went from the end of his high school team’s bench, to playing a nine year professional basketball career. Currently, he is an entrepreneur, has published over 8,000 videos to over 137,000 subscribers, host of the Work On Your Game podcast and has appeared in national campaigns with Nike. He is a Philadelphia native, Penn State Alumni and currently lives in Miami.

Dre came from the city of Philadelphia, and tried all of the sports. Finally at the age of 14, he got into basketball, stuck with it and wasn’t good at first. He made his high school team as a senior and sat on the bench. Since he did not have a scholarship offer for basketball, he knew he would have to walk on in order to continue playing. He went to a small branch of Penn State and ended up making the D3 basketball team.

After graduating from college, he worked at regular gigs at different athletic retail stores. One year removed, he went to an event called Exposure Camp which is a job fair for athletes. He played basketball in front of the scouts of the pro basketball world, and did pretty well over the two days. He started cold calling basketball agents and got a job overseas in Lithuania. At the same time, he was uploading YouTube videos in 2005.

9:50 Belief in Yourself When Proof Doesn’t Exist Yet

When it comes to personalities, there are six. There is agreeableness and disagreeableness, and everyone has a little of both. When you get the disagreeable people, they want to go against the system, and not want people’s approval. These are the people that become entrepreneurs because they are doing things their way.

From 2005 to 2010, Dre had to find a new job frequently. It was a very unstable lifestyle. It’s also hard to get into a relationship because you don’t know where you will end up overseas. When Dre was first posting videos he was considered a loser. In 2009, he found a link to one of the first YouTube influencers and it was her full time job. Dre became a YouTube Partner and around 2009, he started to get a monthly deposit for ad revenue for posting videos.

At this point he was going into his mid to late 20s and he didn’t know if it was sustainable. That’s when he asked himself how he can combine his love for basketball with one of his advantages (the internet).

Some of Dre’s biggest daily disciplines include waking up at 3:45am, a healthy breakfast, yoga, exercise, stretching, walking, and goal setting.

Most people understand discipline, but a lot of people have a hard time implementing it.

37:37 Building the Business in the Right Mindset

Who do you see when you look in the mirror? The first thing is understanding the mindset of the entrepreneur! You eat what you kill and if you kill nothing, you starve that day.

The next thing is the strategy, which is the overall vision of how things should take place. Strategy can be doing 30 minutes of exercise every day. The tactics are the trainer, the bike, running, etc.

So many people feel like they don’t have the luxury of choice. In the beginning, I didn’t know how paying off debt and building this business would go, but I trusted the process and fully committed to figuring it out.

The value of your success is based on what you go through to earn that success. One day, all of us are going to be gone. The value of life should never be taken advantage of. People get so emotional over success because they know what it feels like to lose.

Dre’s new book is called The Third Day and is based on Dre’s most popular framework. And if you are interested, Dre is offering a free coaching “game session” to any Do Your Crap listeners. Schedule your session here.

← A Deeper Dive into My Story: an interview hosted by Julie Voris Sales & Marketing with Soul with Jason Harris →