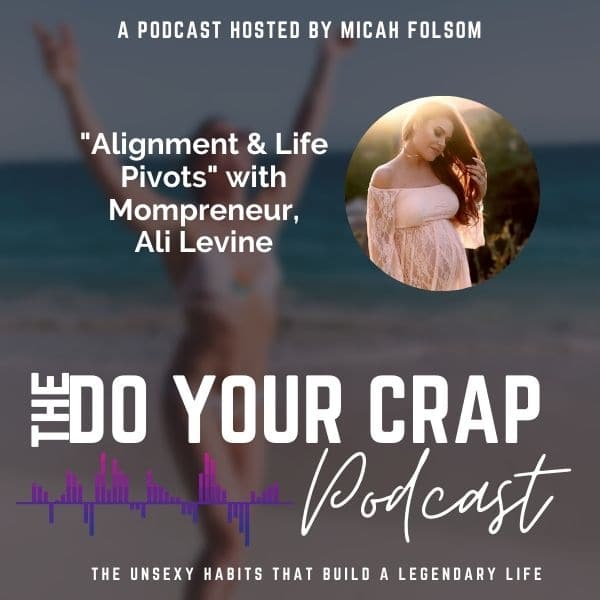 In this episode, I bring on fashion stylist, Instagram Influencer and mompreneur, Ali Levine. We talk about everything from how to make it as a stylist in the LA Industry, to becoming a mother, to getting a handle on your life using meditation and affirmations. You know that I’m all about empowering women to crush life, and today’s guest is the epitome of that!

2:40 From Target Executive to Costume Designer

Ali fell in love with fashion ever since she was super young. Her grandma was always beautifully put together and she had such a passion from that. As a young girl, she’d pick out the craziest colors, outfits, and designs. She believes that confidence is your best accessory.

She went to school for Fashion Merchandising and Design, and her first real job was an intern for Target. From there, they offered her a job and she ran a fashion department in New York. Over time, she realized that her heart wasn’t in retail. She had to start from being a head executive at Target to working as an assistant in corporate.

After the market crash of 2008, she began networking again for new opportunities and after reaching out to people in the entertainment industry, she met Oliver Stone and ended up landing her first job as a production assistant. After a few months, she started working in the costume department a few days per week which kickstarted her passion for fashion again.

After becoming a mom, Ali wasn’t certain the long traveling hours is what she wanted in her life anymore, and if these things were resonating with her anymore. Sometimes we pivot because the Universe forces us to, and sometimes it’s because your soul isn’t burning for it anymore.

For Ali, being a mom is her #1 priority and she’s building her life and businesses around it.

Ali had to check her ego when she had her daughter. She was so concerned with the perfection of her pregnancy, she didn’t worry about the details of what being a mother would entail.

Because she forced so much in her life after having a baby, she began to drown. Going through this, she began to see how much of her ego she hasn’t dealt with, how much old beliefs she hadn’t let go of, and the dangers of social media.

When Ali started sharing about God on social media, she received a lot of unfollowers. She believes that people choose to follow, engage, and consume content – and nobody is forced to follow you.

The more you speak out about what aligns with your beliefs, the more you will have authentic followers who want to follow your beliefs. In society, we’ve been taught for so long that we have to include everybody, but sometimes we put our own selves aside to serve others, and that shouldn’t be the case.

She’s currently in sweats most days! It’s messy and wild, but she feels like she finally learned how to tap into her true authentic self and help empower her daughters to see how to view the world. She is being so intentional and impactful with her daughters, and she doesn’t let the day run her anymore.

← Struggling with Body Image? This Quickie is for You! Monetizing Your Social Media with Jordan English →