How to Accelerate Success Without Working More Hours with Brad Bizjack 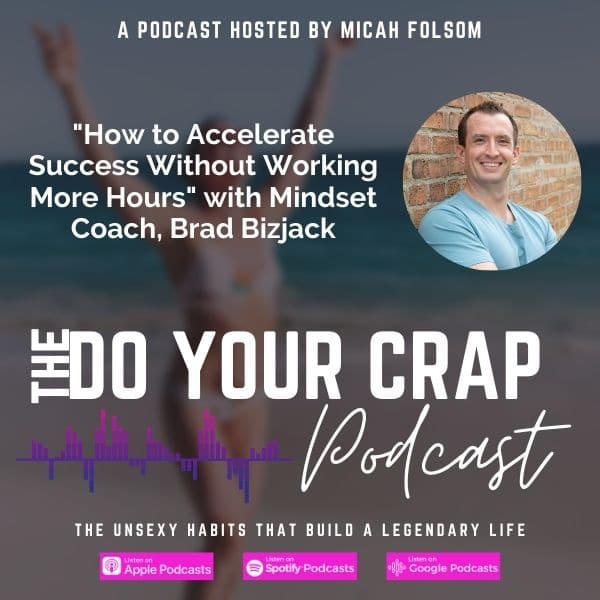 I’m bringing Brad back for another round!! Last week we talked about how to reach your goals and this week, we’re going to dig into how to accelerate success without working more hours. So many people want more success, but don’t want or have the time to work more. In effect, they stay small. Let’s dive into the belief that success requires sacrifice, what sacrifice really means, the success sweet spot, and so much more.

People grow up with a belief that time is traded for dollars. It’s what we’re taught from schools and we’re not taught about wealth. The toxic belief is that success requires sacrifice. A lot of people look at their business and career and decide that in order to be great at it, they have to put in more time than they are now.

If you really want to thrive, you have to adopt a mindset of interdependence.

12:48 The Definition of Sacrifice

When you don’t have the funds to hire out and get help, it’s easy to stay in the mindset of “I”. Success requires sacrificing the fluff (scrolling social media, binging TV, and wasted time), but it does not require sacrificing the important things in life (spending time with kids, exercise, time with spouse, etc).

When people believe that success requires more sacrifice, one thing that they need to let go of is saying YES to everything. This is otherwise known as people pleasing, also known as fear of not being enough. Self care is in the service of others. When you take care of yourself first, that allows you to give.

Busyness is not a badge of honor or something to brag about.

If you want to talk about accelerating access, one thing that people need to adopt is living in the success sweet spot. This is a beautiful place where you’re striving for something so huge, while simultaneously appreciating where you’re at.

Society has built up success to be a destination and end-goal. However, we can show up in those feelings of success every single day.

40:28 Getting Connected to Brad